← back to
Redefining Darkness Records 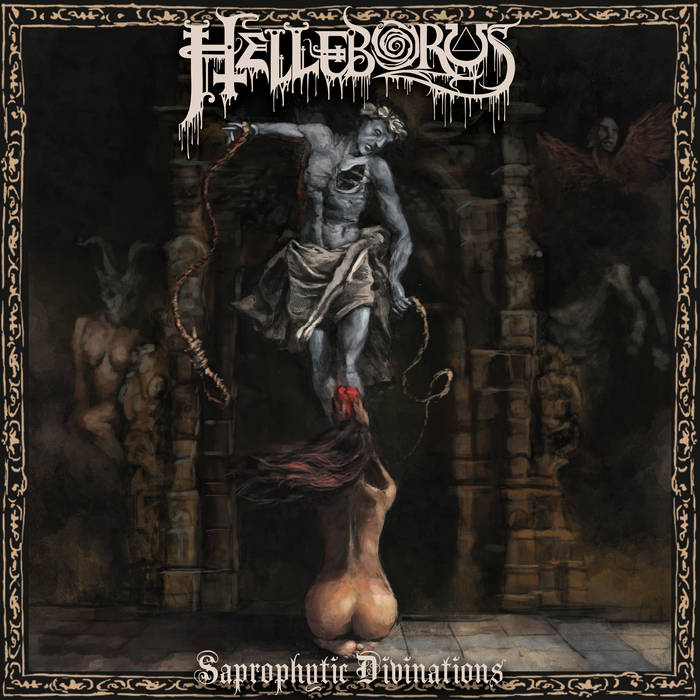 Eric Evilsizor Helleborus has gifted us with an incredible 50 minute experience of blackened riffs, hellish vocals, and haunting melodies. Celestial Grave is a straight banger and every song that follows gets better and better. As a whole, this album is a masterpiece. Favorite track: Celestial Grave.

Mailman “Saprophytic Divinations” is an album that only increases in quality as it goes on, reaching a perfect climax and fulfilling a final resolution. It flows effortlessly and is one of the smoothest black metal albums I have ever heard. Favorite track: Saprophytic Divinations.
more...

"Black metal quartet Helleborus have an ear for the epic, something they demonstrate frequently on new album Saprophytic Divinations. Throughout the record, Helleborus unleash a particularly icy strain of the genre, building a foreboding and sinister atmosphere. 'Saprophytic Divinations' is a diverse record within its black metal framework. Through tempo changes, technicality, melody and the occasional symphonic passage, as well as significantly better production, Helleborus have vastly improved on every element of 2016’s The Carnal Sabbath.
- Decibel Magazine
www.decibelmagazine.com/2019/12/04/full-album-stream-helleborus-saprophytic-divinations/

"Many of us often hope for unions of visual, musical, and lyrical artistry, the integration of sights, sounds, and words that manifests a cohesive vision, with each part elevating the others and making possible a more compelling holistic experience. Such achievements are less common than we might wish, but the Colorado band Helleborus have given us one through their new album Saprophytic Divinations..."
- NO CLEAN SINGING
www.nocleansinging.com/2019/11/05/an-ncs-premiere-helleborus-saprophytic-divinations/#more-168844

"The cult of vileness that is HELLEBORUS have an offering in the works, and it will raise the hairs on the back of your neck. Saprophytic Divinations comes out December 6th via Redefining Darkness Records, and it’s got what I need – unrelenting blastbeats, epic breakdowns, addictive groove and vocals that sound like they’re being delivered from a slashed throat. Helleborus makes black metal for foraging and doing pagan sex rites to – they are heavily influenced by occult herbalism and sexual mysticism, and the title of their sophomore album references organisms that feed off of decaying organic matter."
- CVLT NATION
cvltnation.com/helleborus-alraun-ghost/

"This is masterful metal at its finest. With stellar production and a clear vision behind the music Helleborus have nicely elevated the dialogue around the band. I am extremely curious to see where they go next!"
- Two Metal Guys
www.twoguysmetalreviews.com/2019/11/helleborus-carnal-sabbath.html?m=0

"Twisted evil and so very magical, the black metal sound that Helleborus spit forth is one that has a bit of the old and new school about it...."
- Games, Brrraaains & A Head-Banging Life
www.gbhbl.com/album-review-helleborus-saprophytic-divinations-redefining-darkness-records/

Like the enigmatic & deadly winter flower from which the band takes its name, the ancient Greeks called the Helleborus “the plant of fauns”. Heavily influenced by the Orphic Mysteries and traditional western witchcraft & folklore, the band pushes the exploration of orthodoxy black metal into the uncharted territory of sensual duality with a focus on occult herbalism & sexual mysticism.

Following the debut release The Carnal Sabbath & the liminal single ‘Prayer Of The Undying’, we are pleased to announce we will be releasing Helleborus' sophomore work Saprophytic Divinations. Saprophytic a term given to fungus or plants whom grow or eat from decaying matter. The band explore the concept of prophecy or divine communications blooming from the macabre.

Bandcamp Daily  your guide to the world of Bandcamp